AMC’s The Walking Dead returns in October, but fans are already getting a first peek at the sophomore season. SheKnows has The Walking Dead season two Comic-Con poster and the first look preview that aired during the Breaking Bad season premiere.

Sheriff Rick Grimes literally takes matters into his own hands in this first look at season two of The Walking Dead. If you caught the first season, however, it’s likely to mean more to you. Otherwise, it’s basically just a man bashing in some zombie heads. 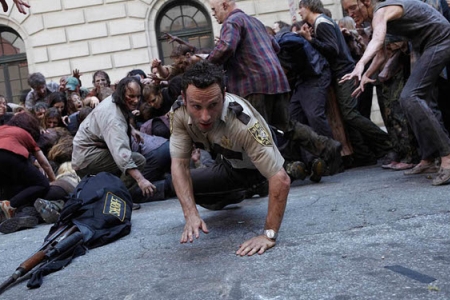 AMC’s breakout post-apocalyptic horror series, based on an ongoing graphic novel series of the same name, took TV by storm last October. The action kicked off last season when former Sheriff Rick Grimes woke up from a coma to find America overtaken by zombies. By season’s end, he’d managed to track down his wife and kid and soon found himself in charge of a small group of survivors, along with his best friend.

Grimes also managed to build a serious TV following! With season two already filming, word is Grimes and his crew of survivors are leaving Atlanta for the countryside. Needless to say, the survivors will run into more than their share of Walkers! Here’s a peek at the new Comic-Con poster.

If you hope to get on board before the show returns in October, The Walking Dead season one is already available via Redbox, Netflix and Amazon.