It’s official: Charlie Sheen still has a career! The actor has been cast in the new sitcom Anger Management. 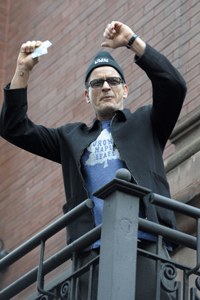 Someone out there thinks Charlie Sheen is still a valuable entertainment commodity and gave the warlock a job. After weeks of speculation, Sheen has officially confirmed he is set to star in the new sitcom Anger Management.

Loosely based on the Jack Nicholson movie of the same name, the show is about “a mild-mannered, non-confrontational man [who] is ordered to attend group anger management sessions led by a therapist who could probably use some anger management himself,” according to a press release from producers.

Sheen will play the role of the therapist.

In a statement, Sheen says he’s psyched to work again.

“I chose Anger Management because, while it might be a big stretch for me to play a guy with serious anger management issues, I think it is a great concept,” he said.

“[Anger Management] also provides me with real ownership in the series, a certain amount of creative control and the chance to be back in business with one of my favorite movie producers of all time, Joe Roth.”

Roth and Sheen have worked together on multiple projects in the past, including Major League, Young Guns and The Three Musketeers.

Roth sounds even more psyched than Sheen about the casting. “With Charlie’s incredible talent and comedic gifts, he remains the leading man of TV sitcoms. I’m excited to collaborate with him once again,” he said.

There’s just one tiny little problem: The show has not been picked up by a network yet. Fingers crossed!