Khloe Kardashian and Lamar Odom have been open about their desire for kids — and it looks like they will be doubly blessed! Sources say Khloe Kardashian is pregnant with twins. 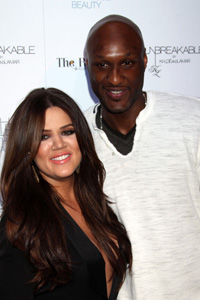 Shortly after saying that getting pregnant is “in God’s hands,” Media Take Out is reporting that Khloe Kardashian is pregnant with twins!

The insider, who is reportedly a family member of Khloe’s husband Lamar Odom, said that the basketball star was bragging to friends and family about the happy news.

“[Lamar and Khloe] were doing fertility treatments, and two eggs implanted,” the insider revealed. “They are having twins.”

Odom reportedly made his family members swear that they would keep it a secret — but it sounds like someone couldn’t wait to share the news.

The couple is not planning on making an announcement until after Khloe’s sister, Kim Kardashian, gets married in August.

“They want to keep it quiet until after Kim [Kardashian’s wedding next month]. They don’t want to overshadow her day,” the source said.

Khloe has talked about her struggle with getting pregnant on the family’s reality show, Keeping Up with the Kardashians. In one episode, she even has acupuncture to help stimulate her fertility.

“I’m 26. It should happen naturally. I don’t want to force it. I would love to have a baby, and if I get pregnant, I get pregnant,” she told People last August. “I don’t think, like… my biological clock is ticking!”

Odom already has three children from a previous relationship, but is anxious to be a dad with Khloe.

As far as baby names go, Khloe and Lamar already have some picked out — and they all start with the letter ‘L.’ They talked about it on their reality show before she was even pregnant. If it is a girl they like the name London and if it is a boy they like the name Luke Joseph.

So maybe she will have one of each?