Brooke Mueller can’t seem to stay clean, and in her latest attempt to get sober, she’s jetted off to a secret rehab in Mexico. 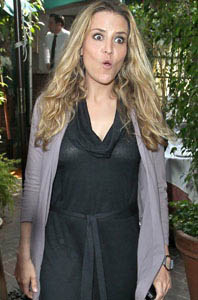 Spotted in rumpled clothes and holding what looked like an improvised crack pipe, Charlie Sheen‘s ex-wife Brooke Mueller is taking yet another stab at rehab in order to get off drugs and keep custody of their twin boys.

This isn’t just any rehab for the reality TV star, though. It’s a controversial rehabilitation facility in Cancun, Mexico, where Mueller will be given Ibogaine, a hallucinogenic drug that’s not legal in the U.S. but used south of the border to control drug cravings in those addicted to cocaine, alcohol, methadone and heroin.

Reportedly, the drug may have severe negative side effects. Dr. Drew Pinsky has said, “I have had this experience with dozens of patients, but most disturbingly these patients had persistent mood and personality changes.”

A month ago, Mueller was in yet another rehab facility. She spent last weekend in the hospital after an incident on a plane led her to storm off the flight before it took off for its destination. Reports say she was fighting with a flight attendant and acting out of control.

How many times has Mueller been to rehab? As many as 15 times.

This time, it will be different, Mueller says, describing the treatment as “extreme,” although she hopes it will “rewire” her addictive mental patterns.