Cheap Trick escaped a stage collapse disaster without a scratch on Sunday night. 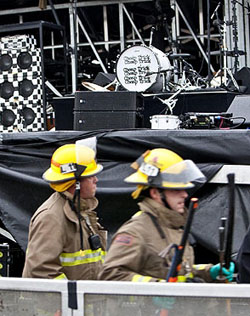 Eighties supergroup Cheap Trick is still making the concert rounds with shows at state fairs and other outdoor events. However, their luck almost ran out Sunday night in Ontario when a sudden storm caused the stage to collapse.

“Severe weather hit the stage as Cheap Trick was performing at the Ottawa Bluesfest tonight. The stage blew down and collapsed. Everyone is shaken up but band and crew are all fine,” the band wrote in a statement on their website.

“Cheap Trick hopes that everyone who attended the show is also ok. Fortunately the band and crew are all lucky to be alive and we’ll see you down the road. And all the best to our truck driver Sandy.”

Several concertgoers were injured during the collapse, including a 49-year-old man who suffered pelvic injuries. Others were treated for minor injuries and allowed to leave.

>>>Stay safe at summer concerts and festivals with our survival guide

“We are so thankful [to be alive],” manager Dave Frey told Rolling Stone.

“They said that we should be looking out for a storm but it wasn’t really that apparent,” he added. “I was actually on stage behind the drummer and I was taking a few pictures right before it happened. The air was still and it was humid and then out of nowhere, this wind hit that was just huge. The local news sources are saying 96 miles per hour, another one said like a hundred and something.”

And that’s why bands have to cancel outdoor concerts sometimes: To keep fans safe.

The catastrophe could have turned out much, much differently: Daniel Biechele, the manager for the band Great White, was sentenced to four years in prison in 2006 after a pyrotechnic display was ignited during a club concert and caused a fast-moving fire that killed 100 fans.

We’re glad another tragedy was avoided and that all the injured will heal quickly.

Have you ever been in a scary or life-threatening situation at a concert?