Life ain’t easy for Paz de la Huerta. The Boardwalk Empire actress reveals she’s been picked on since even before she was born. 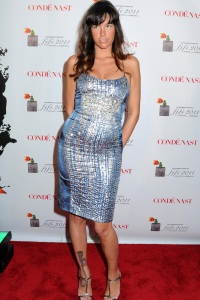 Paz de la Huerta is one of those women who just doesn’t get along with other women. The Boardwalk Empire actress recently elaborated on her long, pre-birth history of fights with females.

On attracting the enmity of fellow females:

Paz de la Huerta: “Women have said the most malicious, disgusting things about me. But I know that when somebody comments about you, good or bad, it is 99 percent of the time their projection of how they feel about themselves. Even my own sister treats me worse than somebody would treat a rat. She actually likes rats, so worse than that.”

On her older sister:

Paz de la Huerta: “Even when I was in my womb she used to punch my mother’s stomach. She did not want me born. I’m working on my relationship with my mother and father, but my upbringing has been very destructive. They’re all Scorpios — my mother, my father and my sister.”

On her now pregnant character in Boardwalk Empire:

Paz de la Huerta: “I can’t share much about the show, but hopefully some of these women who resent me for being [nude] or in little to nothing will be pleased that I’m knocked up, and they’ll pay attention to the performance.”

On swearing off nudity in film:

Paz de la Huerta: “That’s good advice, but I’m telling you, typecasting is typecasting. And I mean, look at Charlotte Rampling. She’s a brilliant actress, and she’s still getting [nude] for films. If I look like that at her age, I’ll flaunt it.”

Check out The New York Times for more on Boardwalk Empire and the inscrutable Paz de la Huerta.