Sue Sylvester doesn’t want you to see Glee: The 3D Concert Movie. William McKinley High’s internationally recognized cheerleading coach is trying to put an end to Glee’s world domination and she’s doing everything she can to stop it.

Sue Sylvester, who’s portrayed by Emmy-winning actress Jane Lynch on the show, has released a letter strongly advising the public to stay away from the Glee movie. To get things started, she has created the Sue Sylvester “Stop Believing” campaign. Clever play on words, right? 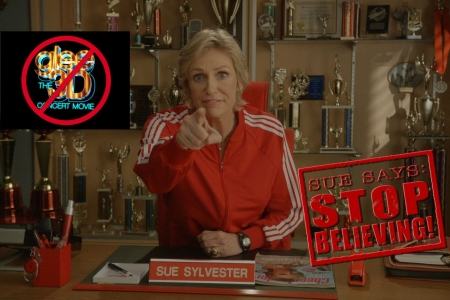 Sylvester’s letter states, “Watching this movie is not only an atrocity to this great nation, but it’s also bad for your health. If I may be so bold as to quote Dr. Charlie Sheen out of context, ‘Your face will melt off, and your children will weep over your exploded body.'” Did she just refer to Charlie Sheen as a doctor? Yes. Yes, she did.

We highly doubt that a few mean words from a scorned cheerleading coach will keep Gleeks out of theaters this summer. They’ll fight tooth and nail to see Rachel, Finn and Kurt do what they do best live and in concert.

Glee: The 3D Concert Movie is scheduled to hit theaters on August 12. Will you turn up for the big screen event?