Accomplished actress Patricia (Patty) Clarkson has wooed hot guys on film since the 1980s but it is the pretty blonde’s turns as hot moms in Easy A and this week’s Friends with Benefits that have the town talking.

One of the most high-profile comments on Patricia Clarkson came to SheKnows directly from her co-star in Friends with Benefits, Justin Timberlake. We got Patricia’s reaction.

Justin Timberlake: “Patty is… a broad!” 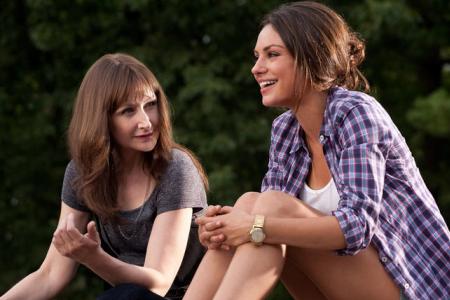 SheKnows: So, on this film, your first day is the scene where you show up and Justin is basically nude. Was that embarrassing or hot or… what?

Patricia Clarkson: It was delightful and I thank (director) Will Gluck every day for that scene [laughs]. Yes, I knew Justin but now I really know Justin. And I’m tellin’ ya right now, the man’s a star!

SheKnows: Well, he just told me he’s in love with you. He said, “Patty is warm and fuzzy to me because she embodies Southern class, a graceful Southern goddess. And she’s a broad, too, and that comes with being Southern. It’s true. There’s something about growing up, being raised by a Southern woman and being in love with the South. I’m in love with her.”

SheKnows: Describe the skit on Saturday Night Live where you played Justin’s mom.

Patricia Clarkson: It was called Mother Love. He and Andy Samberg, after doing [Expletive] in a Box, were getting out of prison and they said, “What are we going to give our mothers?” So I’m Justin’s mother and I have sex with Andy Samberg’s character (Susan Sarandon, as Andy’s mom, was with Justin) and that’s how I met Justin two years ago.

SheKnows: Both your mom character Lorna in this film and Emma Stone’s mother in Easy A are feisty and outspoken and directed by Will Gluck. How did he get you to play another mom for him so soon?

Patricia Clarkson: I had such a blast doing Easy A, with Will and Stanley (Tucci) and Emma Stone. I hit the jackpot. And so when he called me, he said, “I have another part for you.” I was like, “Great.” “It’s another mother.” I was like, [groaning]. He said, “It’s maybe a sister to the lady in Easy A, but like on drugs, like raunchy, like an ex-groupie lady.” I was like, “Oooo, okay!” I just play beautiful people’s mothers — Jim Sturgess or Mila Kunis or Emma Stone, Evan Rachel Wood.

SheKnows: Girl, you’re hot! You’ve got great legs and, in one scene where your character is crashed out after a night on the town, we can see them quite well. What do you do to exercise and keep them that way?

Patricia Clarkson: I don’t like exercise but I make myself do it. You have to do things you don’t like as you get older. I realize I have to suck it up. There is no mystery or something special I do but I have to exercise. I’m an actress, my body is my tool and I want to continue to play sexy people so I’ve got to exercise unfortunately. Sometimes I have a trainer but I just walk. I live in New York but I took a walk in L.A. the other day from Melrose and Huntley to the Chateau Marmont. That last stretch is all the way up.

SheKnows: Lorna was a rock groupie in her heyday. What rock bands or artists would you love to have been a groupie for? 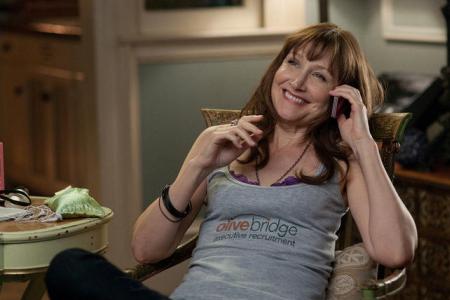 SheKnows: I read that you thought that, in the beginning of your career, you weren’t getting the ingenue roles because of your deeper husky voice. Is that true?

Patricia Clarkson: True. Also, I wasn’t sweet. I was more like a leading lady character from the time I was born. I just needed to get older. And, when I hit my mid to late 30s that’s when the heavens opened up for me. It’s interesting. Now, I’m so lucky. I have so much work and so many amazing people who want to give me jobs.

SheKnows: You work all the time but no big blockbusters. Why not play the sexy, hot, over-40 woman in one of those?

Patricia Clarkson: It’s rare. Other than Sandra Bullock but she’s not even 50 yet, it’s rare to see a woman north of 45 in a really comedic part in a big movie.

SheKnows: I love some of Lorna’s raunchy expressions in this film. “Don’t let me twat block you.” Who came up with that?

Patricia Clarkson: [Laughs] Will writes a lot of this stuff in the moment. She just throws it out. It’s so shocking. I told my mom, “Mom, I say some raunchy things in this movie; totally antithetical to you.”

SheKnows: Lorna thinks that her daughter Jamie (played by Mila Kunis) is afraid of making her mom’s mistakes with men. Is your own mom anything like that? Did you learn from her romantic mistakes?

Patricia Clarkson: Oh no! My mother married when she was almost 18 and she’s been married to my father ever since. They have five daughters. I’m the baby of five girls. My mother didn’t make those kinds of mistakes, not that she is perfect but my mother is a remarkable woman. She is president of the city council of New Orleans. She runs the whole thing; she’s a formidable woman and has accomplished great things in her life. She’s the (opposite of) Lorna.

SheKnows: So how about you, men-wise?

Patricia Clarkson: Well, the mistakes I’ve made I’ve just come to own my own. I struggle with men. I’ve never married, not that I’ve ever really wanted to. I feel like I had a few marriages; a few really big, long-term relationships. I could have been married but I’m a free spirit and a little old-fashioned. I do believe in love and romance but my goal was never to marry and have children.

SheKnows: Talk about working with Mila. She’s just in awe of you.

Patricia Clarkson: She’s divine, a beautiful gal. We ate dinner a couple of times. I could never show up on the set to play someone’s mother and not know them. That would be very bizarre. She’s sassy and I like that. She’s sweet too. She’s kind and lovely. She was well-raised. So was Justin. They are big stars and that’s shocking. I had an immediate connection to her and you see it in our scenes. There is an ease with us. I think she has a long career ahead of her. She’s an old soul. She’s a broad and that’s what makes her a great actress. That’s why she can do this comedy and great drama at the same time.

SheKnows: What would you say to actresses of Mila’s generation? What should she watch out for?

Patricia Clarkson: Make sure everything you do is good for you, as an actor first and not for other people.