Elin Nordegren has to share yet another man with mistress to the stars Rachel Uchitel: Her new boyfriend! 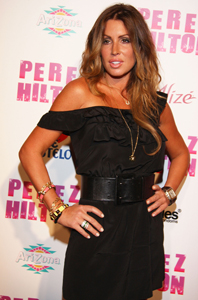 Will Elin Nordegren ever be able to escape painful reminders of her failed marriage to serial cheater Tiger Woods? Not any time soon, it seems. Elin has a new boyfriend and it appeared she was going to be able to put the past behind her — but her new man has a sordid past of his own.

Turns out Jamie Dingman, Elin’s new love, used to date Rachel Uchitel, Tiger’s number one mistress and the woman believed to be responsible for the text messages that blew the lid off of Tiger’s dastardly ways.

In fact, not only were Rachel and Jamie dating, they were so serious that they lived together in Miami — until Rachel started her fling with Tiger.

Sources say that when Rachel told Jamie about her new relationship with Tiger, he said, “That’s okay. I’ll date his wife Elin.”

Funny how that works out.

In the meantime, Rachel Uchitel is embroiled in a new legal battle involving the $10 million hush money settlement she received from Woods. She is suing her former attorney Gloria Allred for malpractice because of some shady business dealings. Uchitel claims Allred advised her to return the settlement due to some pending litigation involving her involvement with Celebrity Rehab with Dr. Drew, but forgot to mention that she would receive attorney’s fees for the move.

Allred’s office said, “Our law firm no longer represents Ms. Uchitel and we have no comment on this story at this time. However, we are confident that we have always acted appropriately and in her best interests.”

Sounds like Uchitel will have to find a new home to wreck for cash.