Are you excited to see Chris Evans kick some Nazi butt in Marvel’s Captain America: The First Avenger? If so, head down to this year’s San Diego Comic-Con, where you and a slew of others can attend the film’s world premiere! 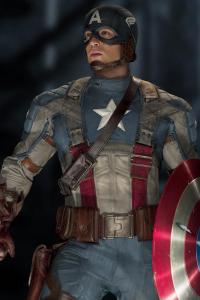 Captain America will debut in front of the Comic-Con audience before opening anywhere else. Screenings will start at 10 a.m. on Thursday, July 21, one day prior to its theatrical release. The movie will run all day with multiple viewings that will end with an 11:45 p.m. show.

The 10 o’clock screening will be a special treat for fans because Captain America himself, Chris Evans, will be on hand to introduce the movie! The film will play exclusively at the UA Horton Plaza with Captain America-themed festivities happening throughout the day.

Check out our Man Candy Mondays salute to Chris Evans!>>