Los Angeles Lakers star Lamar Odom was involved in a car accident last weekend in which his car slammed into a motorcyclist and teen pedestrian. 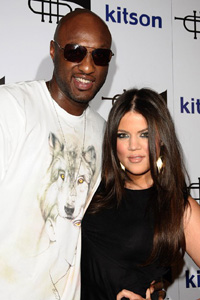 Lamar Odom was in the back seat of a car heading to a barber shop when his chauffer crashed into a motorcyclist and a teenage pedestrian in Queens, New York. He was in town to attend his cousin’s funeral.

The 15-year-old pedestrian and motorcyclist were immediately taken to Elmhurst Hospital with serious injuries, reports Media Take Out. Their names have not been released and no further information on their condition is available.

Sources say Odom was “shaken up” by the crash, and was upset and crying after the accident. He was back at work on Friday. “Shooting a Nike commercial in New York City,” he tweeted.

His wife, Khloe Kardashian, was not in the car with him, but tweeted, “Angels are surrounding me always. Thank you!”

No word if the couple will talk about the car accident on their E! reality show, Khloe & Lamar.

Last week was a bad week for celebrity car crashes. Twilight star Kristen Stewart was spotted swapping insurance information when a woman rear-ended her Mini Cooper in Los Angeles. Both parties were fine, however, Stewart’s car had to be towed away.