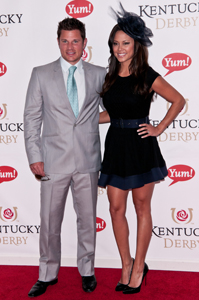 Lachey and Minnillo surprised 35 of their closest family and friends with a tropical wedding ceremony.

“Nobody knew where they were going,” Minnillo told People.

“Our wedding invitations were in the form of a plane ticket. We told them they were going away and the attire was ‘island chic.’ It was all very vague,” Nick added.

Vanessa Minnillo, 30, and Nick Lachey, 37, met in 2006 shortly after his split from ex-wife Jessica Simpson while filming the video for his song What’s Left of Me. This is her first marriage and his second.

So what are their plans now? “For us, this is just a stepping stone to do what we ultimately want and that’s to start a family together,” Vanessa said.

Until then, you can watch Nick and Vanessa’s wedding special Nick & Vanessa’s Dream Wedding July 30 on TLC at 9 p.m. ET/PT.