Marc Anthony and Jennifer Lopez are divorcing after seven years of marriage, the couple confirmed Friday. 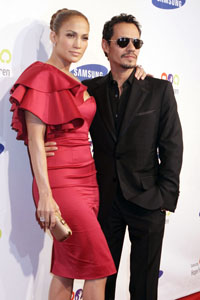 Marc Anthony and Jennifer Lopez are saying adios to their marriage after seven years.

“We have decided to end our marriage,” the couple told People in a statement. “This was a very difficult decision. We have come to an amicable conclusion on all matters.”

“It is a painful time for all involved,” the statement continued. “And we appreciate the respect of our privacy at this time.”

The couple — parents to twins Max and Emme, 2 — seemed happy, but cracks appeared in the union as far back as 2008 when she showed up to the premiere of The Curious Case of Benjamin Button without her wedding ring.

“He’s very, very controlling of her. He would never want her to go to a big event like the Button premiere without him,” a source told the UK Daily Mail at the time. “He doesn’t like it when she takes pictures without him, or even when she leaves a room without him.”

At the time, sources said Lopez was resentful that her career went down the tubes after marrying Anthony.

“She hates that everything she worked for went down the tubes,” one said.

Seems pretty plausible to us — Lopez is definitely working overtime to get her career back on track with stints on American Idol and her role in the upcoming film What to Expect When You’re Expecting.

Are you surprised that Jennifer Lopez and Marc Anthony are divorcing after seven years?