Lost star Doug Hutchison is finally opening up about his marriage to a teenage girl that sent Hollywood tongues wagging. 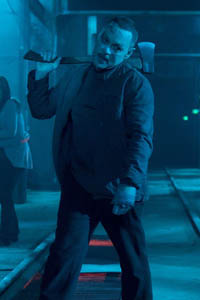 It takes a lot to shock people who live in Hollywood these days, but actor Doug Hutchison, 51, did just that when he married 16-year-old beauty queen and aspiring singer Courtney Stodden last month. On Good Morning America, the newlyweds discussed their lavish nuptials, Stodden’s virgin status and what the teen bride’s parents think of their May-December romance.

“I always joke with Courtney that one of the reasons we worked is ’cause she’s 16 going on 36, and I’m 51 going on 21,” Hutchison revealed in the interview. The two started corresponding in emails, which developed into a flirtation. “She was being very flirtatious,” Hutchison said. Stodden replied, “Well come on, he’s so handsome.”

After Hutchison decided he was falling for Stodden, he called the beauty pageant winner’s parents and confessed. “I said, Krista, I don’t know if you know this or not, but your daughter and I are falling in love… If you and [Courtney’s father, Alex Stodden] have any misgivings whatsoever about this… I will respect you, and Courtney will respect you. And we will step back.”

Not only that, Stodden was a virgin at the time. “I knew that if I kept that, I would really be blessed with a beautiful gift. And God did. He blessed me with my soulmate. So I’m really thankful for that,” Stodden said.

As for the fallout of their union, Hutchison’s mother will no longer speak to him, and both his agent and manager dumped him.

“I’ve been called worse than a pedophile in my life,” Hutchison said.