Lucky for True Blood fans, Anna Paquin has no qualms about being filmed getting frisky with her husband Stephen Moyer. Should it be weird?

Anna Paquin recently spoke to the aptly titled V magazine about filming sex scenes with real-life husband Stephen Moyer, who plays her True Blood vampire boyfriend. While the idea might seem weird at first, it turns out Anna Paquin doesn’t much mind when Bill and Sookie hook up on screen. 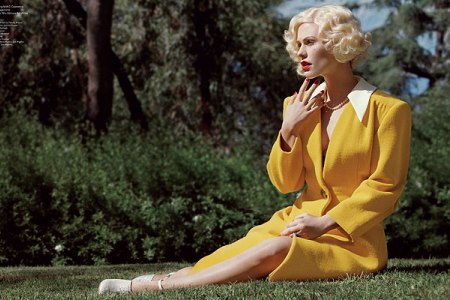 “Maybe it should be weird, simulating sex with your husband in front of people,” Anna Paquin says. “But it’s really not. When it’s a love scene with someone you actually love, there’s no feeling like, ‘Can I touch him here? Can I touch him there?’ You know what your boundaries are — or what they aren’t, I suppose.”

And the throngs of fans worshipping her husband? Anna Paquin continues her open, unshakable attitude. “There’s probably something wrong with me,” the 28-year-old says, “but I find it amusing to watch these men and women fawn all over him. It’s not like anyone’s really trying to do anything inappropriate. They just want him to hug them… or bite them.”

Anna Paquin, who came out as bisexual last year, has no regrets about taking part in the Give a Damn campaign. In regards to coming out, she says, “Frankly, no one had ever asked me before. My sexuality is something I’m completely comfortable with and open about. There’s a lot of prejudice toward us, but the more people talk about it, the less of a big deal it will be. And that will be better for everyone. Who people choose to sleep with — or spend their lives with — shouldn’t matter, not that anyone particularly cares who I’m attracted to.”

For more with Anna Paquin, check out V magazine!