90210 actress AnnaLynne McCord is dating a new dude — and he’s much, much older. 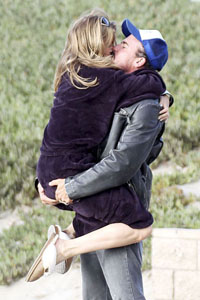 90210 actress AnnaLynne McCord is moving on from Kellan Lutz — and she’s found someone way different! The actress, 23, is dating 41-year-old actor Dominic Purcell, according to Us Weekly.

Purcell — best known for his role on Prison Break — even visited McCord on the 90210 set earlier this week for a steamy PDA session.

“In between takes she would go on a short walk with him or go to a private corner and make out with him for a bit,” a source said of the couple. “She seemed like she was beaming with excitement that he was visiting her.”

The actors appear together in the 2012 film Officer Down. Apparently McCord likes the older dudes.

“I look for a man, not a little boy,” the actress told the magazine earlier this year. “I like honesty and strength. I like confidence, and talent, and yeah, I’m really happy right now!”

Eh, we still think Lutz is better for you than this guy, AnnaLynne. We’re not getting down on older dudes, but you’re in your 20s — date guys who have the same mind set as you.

As for Lutz, it doesn’t sound like he’s that heartbroken about the breakup.

“We’re both busy and we’re both focused on our work,” Lutz told Ryan Seacrest of his non-relationship with McCord.

“I’m really busy. I don’t know if I can say I’m enjoying being single. I just don’t have time to focus on finding a girlfriend,” the bleach blond actor added.

Don’t worry, we’re ready for a relationship whenever you are, Kellan.

What do you think of AnnaLynne McCord’s new boyfriend?