Martin Scorsese is taking a break from hard-hitting dramas to tackle family friendly 3D. The first trailer for Hugo, which stars Chloe Moretz and Sacha Baron Cohen, has been released and it’s oozing with magic and fantasy. 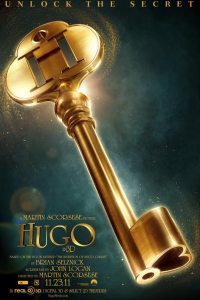 The directed by Martin Scorsese Hugo is based on the extremely popular and acclaimed book The Invention of Hugo Cabret, written by Brian Selznick. Newcomer Asa Butterfield, who’s surrounded by veteran actors like Ben Kingsley, Jude Law, Ray Winstone and Christopher Lee, plays the title character.

Hugo Cabret is a young boy living an extraordinary life inside the walls of a train station. After his father (Law) dies, the only thing he has to remember him by is a special invention with a heart shaped lock that his friend Isabelle (Moretz) surprisingly has the key to.

The film opens this Thanksgiving and will be going head to head with another classic — The Muppets! Even though Hugo looks fun and exciting, it will have a serious fight on its hands when it comes to those puppets.

Hugo opens in theaters on November 23.