The end is here! Harry Potter and the Deathly Hallows Part 2 has finally opened in theaters and is breaking records left and right. It just knocked The Twilight Saga: Eclipse down a peg for the highest-grossing midnight showing and there’s more to come! 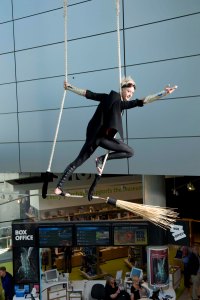 The Twilight Saga: Eclipse earned $30 million at midnight in 2010 and Harry Potter has pulled in $43.5 million! It also set a record for IMAX screenings when it earned $2 million at their midnight showings. The global gross for Harry Potter and the Deathly Hallows Part 2 is $105.1 million and rising.

Theaters all over the globe have pulled out all the stops for Potter’s final bow including the National Media Museum in Yorkshire. Its giant IMAX screen was one of the first in the world to give audiences their first look at the last Harry Potter.

Wannabe wizards and witches will get the opportunity to join in with fun free activities including badge making, face painting, as well as taking their place in fancy dress for a Hogwarts 2011 3D Yearbook.

But if you can’t make the event, don’t worry. You can still watch Harry Potter in his final battle at a theater near you! Harry Potter and the Deathly Hallows Part 2 is playing at venues everywhere!