The ex-wife of Tiger Woods is healing her broken heart with the help of a new man. 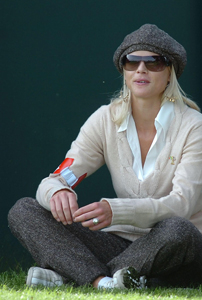 Elin Nordegren is moving on — the ex-wife of Tiger Woods has a new boyfriend.

Nordegren has been spotted smooching New York marketing executive and financial wiz Jamie Dingman outside of her apartment in Sweden.

Elin was previously linked to a South African man who attended the same college that she did.

Friends say the beautiful blonde and Dingman met in January at the Red Cross Ball in Florida, where Nordegren keeps a home with her kids close to Tiger’s new digs.

“He’s never been so happy. He and Elin have strong feelings for each other,” a friend of Dingman said. “He’s a classic all-American guy. He’s handsome, a total gentleman and low-key. He’s never been in the press. Elin’s a very lucky girl; he’s a great guy but very private.”

Not that Nordegren doesn’t already have plenty of her own money — she reportedly received a divorce settlement of over $100 million from Tiger Woods — but Dingman is quite well off in his own right, so she doesn’t have to worry about his motives for dating her. He is the son of billionaire Michael Dingman, splits his time between China and the Bahamas and once owned a Formula 1 team sponsored by a Swedish royal charity.

And the best part?