An estimated 18,000 fans shut down streets in New York to watch Chris Brown rock the Today show stage. If you missed it, keep reading to find out all the details.

A mob of fans showed up to watch Chris Brown perform on the Today show’s Summer Concert Series Friday morning (July 15) and to say he shut down Rockefeller Center is an understatement. 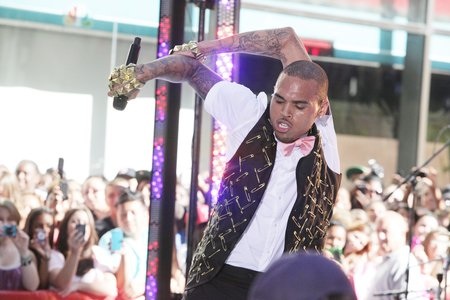 This hardly ever happens in New York, but police closed down 48th and 49th streets to vehicles and it was all for Chris Brown and the fans that were camping out since Wednesday night.

Here’s what he had to say via Twitter about the experience, “Love teambreezy so much… Wish the concert was longer today! Thx you Today Show for your everything Love ya!… 18 to 20 thousand people showed up at 7 this morning! That’s crazy!! Biggest crowd the today show ever had!… I love my fans!!!! It is really truly an honor and a blessing to create music and evoke emotion for positivity. Can’t live without my fans.”

Because of the awesomeness of the event, we’re giving you lots of video starting with the crowd!

Brown hit the Today show stage as part of the show’s Summer Concert Series, singing hits Forever, Yeah 3X and She Ain’t You.

Can we seriously talk about his killer wardrobe? Who didn’t love his pink bow tie, bedazzled sparkly gloves and safety pin vest?

We had to give you some Yeah 3X! He is just an amazing performer — try and tell us he isn’t.

Chris Brown seems to be forging ahead despite his past bad press. He recently dominated the 2011 BET Awards with numerous trophies including a fan favorite honor. A fan favorite award when you’ve had trouble like attacking your girlfriend and going ballistic on a morning show really means Chris Brown must be doing something right.

What did you think of his ability to shut down Rockefeller Center with a stellar set for the Today show Summer Concert Series?