When Jenna Fischer announced her pregnancy back in May, all of us fans of The Office were secretly wishing baby Cece would get a brother or a sister on the show — we love it when wishes come true.

Jenna Fischer is one lucky pregnant actress. When The Officereturns, Fischer won’t have to hide her own pregnancy behind giant bowls and pillows while playing Pam — because Pam will be pregnant. 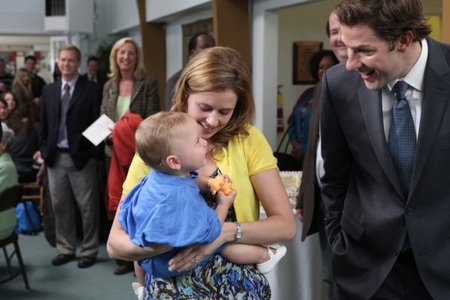 Jenna Fischer, who is expecting her first child, told New York’s Vulture Blog, “Pam will be pregnant when the season starts.”

How did this happen and when? She revealed, “Pam and Jim snuck away last season on Valentine’s Day, and they had sex. The story is that they conceived this baby at that time and were keeping it a secret until we come back from the summer.”

Pam and Jim, who are parents to baby Cece on the show, will no doubt bring another bout of hilarious pregnancy antics to the show, but for Jenna Fischer it was more about perfect timing.

“When we started shooting that [Valentine’s Day] episode, I thought to myself, ‘If everything goes well, this is going to be a very, very convenient coincidence,'” the actress explained. “And I think I found out I was pregnant when we were shooting that episode.”

The Office is also getting ready to welcome James Spader as a regular cast member when the show returns on September 22. Spader will have entered as the Dunder Mifflin office manager but will move himself to CEO of Sabre (the parent company of the paper business) pretty quickly — within hours.

What do you think of a new baby for Jim and Pam on The Office courtesy of Jenna Fischer’s pregnancy? Tell us, we want to know.