A woman slammed into the back of Kristen Stewart’s car on Thursday, but luckily the Twilight star was unscathed.

There were no vampires around on Thursday to stop a Jaguar from slamming into the back of Kristen Stewart’s mini Cooper in Hollywood. 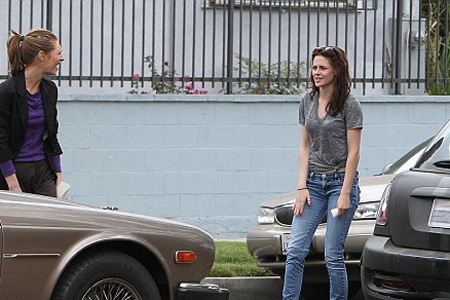 The 21-year-old actress was spotted exchanging information with a woman who rear-ended the back of Bella’s car.

Wearing a gray v-neck t-shirt and skinny jeans, Stewart inspected the damage to her car and appeared flustered, but neither party appeared injured. Unfortunately, her car didn’t fare so well and the bumper was banged up pretty good.

After emptying the car of its contents, a tow truck was spotted towing her car away.

Stewart and the other lady appeared friendly to each other, and she has a great story to tell her friends (“I just ran into Bella Swan’s car!”).

The actress has been spotted all over town recently. She was seen getting her passport renewed, as well as doing yoga and taking horseback riding lessons for an upcoming role.

The actress is taking a break from acting to visit her boyfriend Robert Patterson on the set of his new movie Cosmopolis as she gears up to start filming Snow White and the Huntsman, co-starring Chris Hemsworth and Charlize Theron. Twilight: Breaking Dawn Part One will be released this November.