Wipe those tears dry, ladies: The rumors that George Clooney has already found a new love are not true. 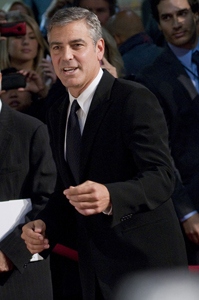 Despite the rumors that George Clooney has already moved on from his breakup with Elisabetta Canalis with a new love, the perpetual bachelor is still single.

Various Italian magazines have been reporting that Clooney would debut his supposed new girlfriend on the red carpet at the Venice Film Festival next month — but Clooney says it just ain’t true.

“The Italian press, from Corriere Della Sera to TGCOM, Ansa, NewNotizie, Sky.it and even Vanity Fair are all running a story that quotes me as saying that I’m bringing a ‘new girl’ to the Venice Film Festival,” Clooney said, breaking his rule of not talking about his private life. “I never made that statement and it’s not true. It was made up to sell tabloid magazines. It’s a ridiculous lie and should be corrected as publicly as it was originally written.”

Not coincidentally, the Venice Film Festival is where George Clooney first went public with his relationship with Canalis two years ago.