The creator of the critically acclaimed television show Sons of Anarchy is incredulous that the series wasn’t on the list of 2011 Emmy nominations — and he’s taking his grievance public. 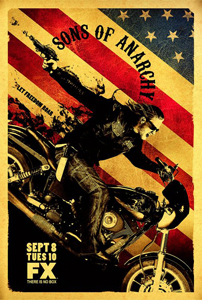 Kurt Sutter, creator of the hit FX series Sons of Anarchy, says that the fact his show didn’t get even a single Emmy nomination obviously means the voters are a bunch of old, shriveled-up shrews; he totally ripped the group apart on his Twitter feed Thursday.

“Best part of not getting an emmy nod. now i don’t have to pretend i give a [expletive] about the profiteering douchebag academy… because you know if we were nominated i’d be all humble and blowing smoke up their asses. now i can stay true to myself and just be a [expletive].”

“These two academy member walk into a bar. one orders a beer. then they both die because they’re so [expletive] old.”

“If my mom and dad were alive this emmy snub would kill them. that’s not true, they were too old to understand my show. just like the academy.”

Sutter’s not much of a Glee fan, either. “[expletive] glee. hate those annoying, ‘please accept me for who i am’, singing brats. there, i said it. are you happy?”

Perhaps remembering how Ryan Murphy, the creator of Glee, reacts when crossed, Sutter halfheartedly tried to backpedal a bit on that last comment: “I love ryan murphy,” he wrote. “He’s always very cool with me. love glee too. just tired of all the [expletive] piling up at its feet.”

Sons of Anarchy isn’t the only show that didn’t make the Emmy nom cut; see who else was snubbed. As for who did make it, check out the entire list of the 2011 Emmy nominations.