After giving birth to first daughter Harper after being a mom to three sons, Victoria Beckham is over the moon! Her first daughter with soccer star husband David Beckham is a true miracle to this devoted mom, who gave up her musical career to tend to children Cruz, Brooklyn and Romeo. 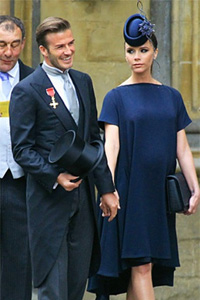 Daughter Harper Seven Beckham is giving Victoria Beckham a reason to sing once again, even if it’s just lullabies. The lovely little girl, who is the first daughter to soccer star David Beckham and his fashionista wife, joins brothers Cruz, 6, Brooklyn, 12, and Romeo, 8, to fill out the expanding Beckham clan.

According to People magazine, Victoria stated, “Baby Harper is the most beautiful baby girl I have ever seen. I have fallen in love all over again.”

Victoria Beckham is one of the most beautiful women in the world. She made quite a fashion statement when she brought pregnancy chic to a whole new level at the wedding of the new Duke and Duchess, William and Kate, this past April.

She also revealed to People that her sons are equally thrilled with their little sister. “We all feel so blessed, the boys love their baby sister so much.”

Prior to Harper’s birth, media interest in Victoria’s newest bundle of joy was at a feverish peak, even prompting some magazines to suggest she pose nude to immortalize this beautiful time in her life, a la Demi Moore.

Although flattered by the interest, Victoria was quite blunt when asked if she would indeed go au natural for a magazine cover. She stated, “Nope, sadly not. I’m really not one of those people that likes to go out and pose and flaunt being pregnant. Not like there’s anything wrong in that. I’m so proud to be pregnant and I feel so blessed and so happy. I really do. But I’m just not that kind of person. So, no, I won’t be taking my clothes off. I don’t think that anyone needs to see that, other than my husband. Absolutely not.”