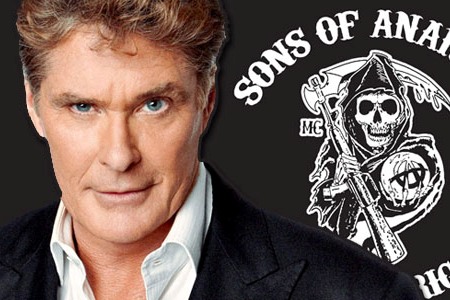 The Hoff is heading to Sons of Anarchy to play Dondo, an adult film producer who helps out the guys in SAMCRO. FX confirms that, for now, Dondo’s only slated to appear in the fifth episode of the new season this fall, while creator Kurt Sutter dropped a big hint for SOA fans.

“Last year, Stephen King, this year ‘the Hoff’ — your dose of seasonal ironic guest stars,” he tweeted. “Here’s the best part… hoff and tom arnold in the same scene. say it ain’t so, joe. say it ain’t so…”

Seems the Hoff’s Dondo may team up with the guys to enact some long overdue revenge on Arnold’s character!

As for the new season, head honcho Sutter is clearly amped about the story, if not ratings and the Emmy snub. 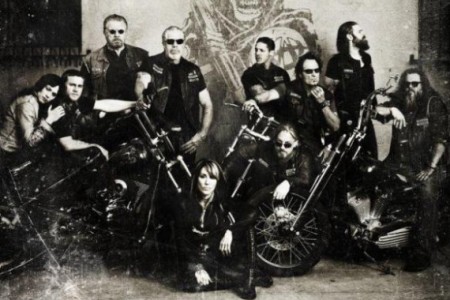 “So far, the new season feels very potent,” Sutter wrote in his blog. “We’re back in Charming, we’re out of jail and we’re making money. With that upswing comes all the complications that success and power bring. Season four is all about the club. The personalities, the history, the alliances, the conflicts — the inside dynamics of an organized outlaw enterprise. Ego, greed, violence and fear reign supreme. I’m halfway through the cut of 401 and it’s pretty [expletive] badass.”

Other newcomers this season are clearly coming to shake things up. Rockmond Dunbar (Terriers, Prison Break) clocks in as Charming’s tough new sheriff, with LaMonica Garrett as his deputy sheriff. Danny Trejo (Machete) will be a dangerous new associate of SAMCRO; Niko Nicotera is a new SAMCRO prospect, Ratboy, and Fernanda Andrade is sure to cause trouble as Jax (Charlie Hunnam) and Tara’s (Maggie Siff) sexy babysitter Elyda.

Sons of Anarchy is set to return sometime during the fall of 2011.