The fourth season of Jersey Shore is coming — are you ready?

Are you ready for a new season of GTL — gelato, tan, laundry? Get ready, ’cause those crazy kids from Jersey Shore are back with the fourth season of their MTV show — and this time, they’re taking over Florence, Italy. 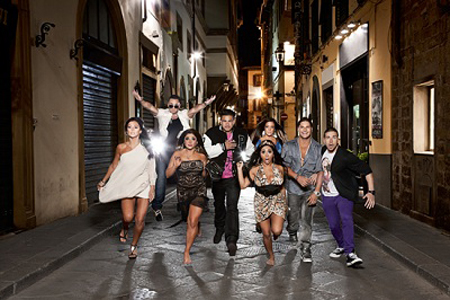 “The wait is officially over for Jersey Shore fans who have eagerly anticipated the return of television’s most notorious housemates to watch them bring G.T.L. to the shores of Italy. The summer will heat up Thursday, August 4 (10 p.m.) when Season Four of Jersey Shore premieres and the cast heads overseas to Florence to learn all about the culture they love and live by in the birthplace where it all began. As they navigate a new country, they will bring their trademark hilarity, fist-pumping and family dysfunction to ‘the beautiful country,'” MTV said in a statement.

The first official trailer for the new season will air on Monday, July 18, during the new episode of Teen Wolf.

Can’t wait until August 4 — or even next week? We’ve got your first peek at Snooki and Deena’s very public fender bender.

Are you pumped for season four — or are you over it, like Vinny and The Situation?