Matthew Bellamy finally revealed the name of his son with Kate Hudson — and they’re keeping part of it in the family!

Related story People Think These Are the Worst Celeb Baby Names of All Time (& They're So Harsh!) 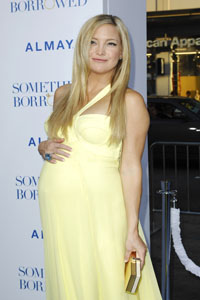 The bouncing baby boy has a name! Matthew Bellamy revealed the name of his son with actress Kate Hudson — and it has some family background.

“Mum and baby are strong and healthy. Mum was a warrior, Bing popped out after 4.5 hours of intense pushing!” he added.

Sounds pretty painful! No explanation was given for Bingham, though the Hawn comes from Hudson’s mother, Goldie Hawn. One question still remains: Why did it take so long for them to come up with a name? It might be because the newly-engaged couple thought it was a girl.

“Everything’s been so different, which is why I think it’s a girl. And it definitely doesn’t belong to me anymore — this area,” Hudson said recently. “It’s all hers. So, I feel like that means it might be a girl.”

Baby Bingham is the second celebrity tot with a special name — Victoria’s Secret Angel Miranda Kerr revealed that she named her son Flynn after her late boyfriend.

“Chris and I had been dating for two years,” she told People. “After he died, I wrote him a letter that said I hoped to name my first child after him in some way. I told Orlando, and he was the one who said he’d be happy to do that. Orlando’s a good guy.”

What do you think of the name Bingham Hawn Bellamy?