Glee star Lea Michele is among the cast members graduating next season. While a diploma might be happy news for Rachel Berry, it also means Lea Michele is out of the show! 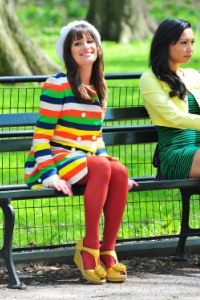 Upset that Lea Michele‘s time on Glee is almost up? Take heart knowing that she doesn’t want you to be. In wake of the Glee graduation news, Lea Michele has taken to Twitter to reach out to fans.

She later added, “To Gleeks everywhere, you’re in my heart now and forever. Love u all!!! This is just the beginning!!”

Co-star and fellow graduation doomed Gleek Chris Colfer chose not to address the casting news, instead tweeting about the show’s recent Emmy Award nominations. “Thank you so much for all the congratulating tweets!” Chris Colfer wrote. “I’m so excited for all of our nominations!”

Lea Michele also appropriately geeked out over the Emmy news, writing, “So happy #glee was nominated for an Emmy today for best comedy series!! And a HUGE congrats to my BFF @chriscolfer and the amazing Jane.”

Tell us, Glee fans — are you upset over the Glee graduation news? Or do you share Lea Michele’s optimistic Glee outlook?