Robert Downey Jr. and Jude Law are back on the case this December and the new trailer for Sherlock Holmes: A Game of Shadows has dropped. Has Holmes finally met his match?

Sherlock Holmes: A Game of Shadows drops December 16 and Sherlock (Robert Downey Jr.) will indeed meet his match. In the sequel to Guy Ritchie’s 2009 blockbuster based on the classic team, sidekick Watson (Jude Law) makes it to the altar, but thanks to the evil Professor Moriarty (Jared Harris, Mad Men), the honeymoon is over before it starts. 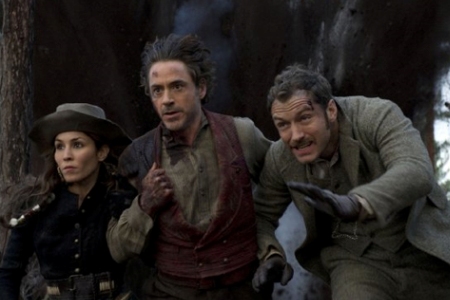 Convinced the Crown Prince of Austria’s untimely death is no suicide, Holmes, Watson and their new cohort, Gypsy fortune teller Sim (Noomi Rapace, The Girl with the Dragon Tattoo), follow the case from England to France to Germany and finally to Switzerland. The prince’s murder is just one piece of the puzzle created by evil mastermind Moriarty, and Sherlock and his band have one serious fight on their hands.

The new Sherlock Holmes: A Game of Shadows trailer doesn’t cover any of this. It’s simply a preview of another round of madcap fun, wild action and sarcastic smack-downs between the boys, not to mention a peek at Downey’s Holmes in drag.