Lindsay Lohan says she should have been cast in the movie Black Swan, instead of Oscar-winning actress Natalie Portman. 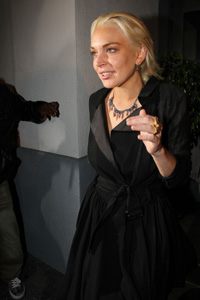 In between sips of wine, Lindsay Lohan chatted with Plum Miami magazine writer Jacquelynn Powers about her sobriety… and her disbelief that she wasn’t considered for the starring role in the movie Black Swan.

She said she was frustrated with her career and she “took ballet until she was 19 and was indignant that she was not considered for the movie Black Swan.”

Natalie Portman trained for the Black Swan role for six months before filming started, and that included working out for five hours a day, seven days a week. As Portman was doing this, Lohan was staying up all night partying and was in and out of rehab.

The interview with Lohan took place before her house arrest. ?Powers said that Lohan ended up backing out of the interview at the last minute, however, Powers spent some time with her during the photo shoot — and her appraisal of Lohan was not flattering.

She said Lohan was “constantly looking for drama, whether it was picking a fight with her younger sister… or freaking out over a lost pair of Zanotti heels.”

“As we pulled up to the Fontainebleau, a bright-orange parking cone was blocking the entrance,” Powers remembers. “Not accustomed to waiting, apparently, she lowered the car’s window and shouted, ‘Move that cone. I’m Lindsay Lohan.’ And it was done.”

Powers said Plum magazine covered all of LiLo’s expenses, including airfare and lodging in the penthouse suite of the Raleigh hotel. Despite that, not only did Lindsay back out of the interview, but she and her entourage refused to leave the hotel!

“Monday morning was supposed to be check-out time, but Lindsay and her posse refused to leave,” Powers says. “It was like watching the lights come on at a nightclub after-hours — not pretty.”