Kim Kardashian is deep in the thick of wedding plans — but when is the big day? 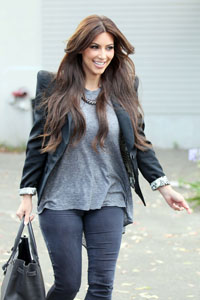 When is Kim Kardashian getting married? Sources say it will happen before the end of the summer: Kim Kardashian’s wedding date is August 20, according to sources close to the reality star.

But first, Kim and her fiancé Kris Humphries will enjoy his-and-hers bachelor and bachelorette parties in Las Vegas nightclubs Tao and Lavo.

How are those wedding plans coming along? Khloe Kardashian says that their mom is doing most of the work!

“I have no idea what’s going on,” Khloe said, “but I’ve seen how much my mom has been doing, and I don’t know how my mom does it! Kim should be kissing the ground that she walks on. It’s amazing.”

A source says the guest list has already grown out of control. “There’s no location yet, but Kim has already invited at least 1,000, and the list is getting longer. The original idea was to have a wedding on each coast, but she now wants one huge wedding.”

“She’ll probably reveal where the ceremony is. She hopes to make a huge entrance. She’s having guests sign confidentiality agreements.”

The wedding, and most likely all of the events leading up to it, will be broadcast on E!