A new trailer for Steven Spielberg and Peter Jackson’s The Adventures of Tintin: The Secret of the Unicorn has been released. And unlike the teaser before it, this version takes us out of the shadows and into the action.

The Adventures of Tintin is based on a popular Belgian comic that follows an ambitious young reporter who investigates various mysteries. The character is played and voiced by Jamie Bell, who along with his co-stars submerged himself in the world of motion capture for the film. 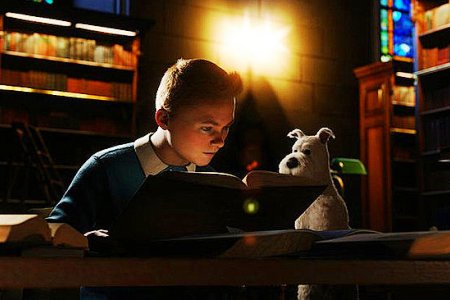 Tintin finds himself in a heap of trouble when he finds a model ship that holds a big secret. Everyone wants it and they’ll do anything to get it. With the help of a few friends including Inspectors Thompson (Simon Pegg) and Thomson (Nick Frost) and Captain Haddock (Andy Serkis), Tintin sets out for the truth.

The big villain of the story is Red Rackham, who is deviously played by Daniel Craig. He wants that model ship and its unfound treasure bad! The animation in the trailer looks amazing and we’re sure the 3D element will only make it better.

Steven Spielberg and Peter Jackson’s The Adventures of Tintin: The Secret of the Unicorn opens on December 23.

The Adventures of Tintin: The Secret of the Unicorn