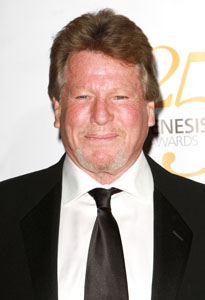 When Farrah Fawcett died, she left her vast — and extremely valuable — art collection to her alma mater, the University of Texas. One of the paintings included in the gift was one of two original Andy Warhol portraits of the Charlie’s Angels star. What happened to the other one?

That is what started the lawsuit between Ryan O’Neal and Craig Nevius. O’Neal claims that for years Nevius has been after him, spreading false rumors and innuendo about the actor and his relationship with his late partner — even selling private medical information while Fawcett was dying of cancer.

Where does Nevius fit into the painting scandal? O’Neal says Nevius told media outlets that the actor stole the painting from Fawcett, resulting in both Good Morning America and Star Magazine running stories that he was being investigated for theft. O’Neal says he is not under investigation for anything and calls the allegations “false, malicious and defamatory,” so bad, in fact, that the University of Texas bought it hook, line and sinker and demanded he hand over the painting.

O’Neal says the portrait is one of his most “prized possessions and a precious memento of his life with Ms. Fawcett,” and that under no circumstances was it part of her estate. He claims he has suffered “humiliation, mental anguish and emotional distress” and wants $1 million in damages.