Artie Lange is returning to radio — but it will not be on The Howard Stern Show. 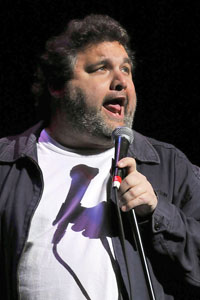 Comedian and radio personality Artie Lange is hoping to stage a huge comeback after a very public breakdown, suicide attempt and rehab stint — and it will not be with his old pal Howard Stern.

Lange is putting together a deal with friend and fellow comedian Nick DiPaolo for their own show to be nationally simulcast on DirecTV and Fox Sports Radio — the same radio network he gave his first post-breakdown interview to last week.

What about Howard? As we reported last week, Stern has said he doesn’t think a radio comeback is the best thing for Artie’s mental health at this point. How does Artie think Howard will feel about this new deal?

“Howard’s the greatest guy in the world,” Artie told camera guys out in Hollywood last night, adding, “He’s been supportive of everything that’s happened and he’s been a good man to me… so hopefully he’ll be supportive of this… but you never know.”

The deal is not yet set in stone, but both sides are hoping to make it happen in time for a September start.