Kevin Bacon died? Bet that’s news to the star, who police can jokingly confirm is alive and well. 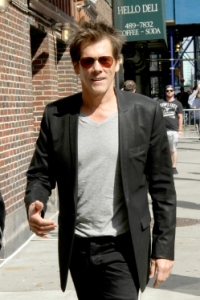 Reports that Kevin Bacon died have gotten out of hand to the degree that police from abroad have gotten involved. Officials in Queensland, Australia have spoken out to discredit reports the actor was involved in a deadly car accident after receiving a deluge of calls inquiring about the rumor.

Supposedly Kevin Bacon died after a single vehicle crash between the western suburbs of Willowbank and Ipswich, just outside of Brisbane. The 53-year-old is rumored to have been on vacation Down Under at the time of the crash.

A spokesman for the police tells reporters, “We have no idea how the rumor started but my colleague had lots of calls overnight. We checked and thankfully there were no Kevin Bacons injured or deceased overnight.”

See? No need to fret that any Kevin Bacons have died, let alone the beloved one who is actually busy filming a movie in Atlanta.

Queensland residents are lucky to have a police service that keeps the public up-to-date with road crashes via Twitter. The service tweeted, “We can happily confirm that Kevin Bacon was Not killed in a car crash in Qld overnight.”

Not afraid to have a little fun with the Kevin Bacon died rumor, they continued, “We did enjoy talking to every entertainment writer on the planet (or it seemed that way) though.”

While we’re not sure if Kevin Bacon ought to be horrified or grateful that so many care, he is certainly in good company. This past week alone has seen Hugh Hefner and Wesley Snipes also targeted by death rumors.

Now that the Kevin Bacon died rumor can rest in peace the police can get back to real work!

24 hrs ago
by Kay Snowden