Actress Sharon Stone has been sued by a man who said he fell and was injured on her property. 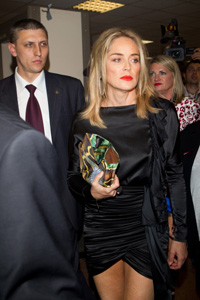 Sharon Stone went to court when a man named Peter Krause (not the actor) sued the Basic Instinct star after he fell into a 15-foot ravine on her property causing “severe and permanent injuries.”

The Los Angeles jury has ordered Stone to pay the man $232,000 to make up for injuries and loss of work resulting from the fall. They concluded that she was “negligent” because the fence surrounding the 15-foot ravine was not up to code.

The injury happened in 2008, after Krause fell down the “large concealed drop-off” while he was on Stone’s property to install outdoor wiring. The fall caused internal injuries and has resulted in him being unable to work since the accident, he says.

Wearing a navy pinstriped suit, Stone testified on Monday and showed jurors “detailed diagrams and photographs of her backyard” and said her property was safe. She said that her yard has a chain-link fence surrounding it so the man should not have fallen through the broken wooden lattice.

Other witnesses that testified in the case included doctors and a representative of the State Compensation Witness Fund.

Krause was seeking unspecified damages, however, jurors determined that Stone must pay him $232,000.