Former 7th Heaven star David Gallagher is getting ready to hit the supernatural world of The Vampire Diaries. 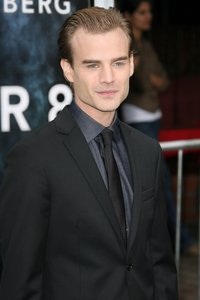 Former 7th Heaven star David Gallagher, who was recently seen in J.J. Abrams’ Super 8, is adopting a new role — a werewolf on the hit show The Vampire Diaries.

So, what will the newbie of TVD play? Well, it won’t be a vampire. David Gallagher will play Ray Sutton, a werewolf who comes in contact with Klaus who is played by Joseph Morgan. That can’t be good for Gallagher’s character. Everyone who crosses paths with Klaus ends up with the same fate — minus a heart.

We’re completely on the edge of our seats waiting for the new season of The Vampire Diaries to return. Will Stefan be saved from his past dark ways after making a deal with Klaus in the season two finale? Will Damon and Elena ever move forward with a romantic relationship? And what’s up with Jeremy’s dead girlfriends showing up?

The Vampire Diaries returns for its third season September 15 on the CW. Do you think David Gallagher’s two-episode stint will have any impact on the events that go down in season three?