Though dancing queen Karina Smirnoff has been a busy bee working to open her own dance studio and launch her new makeup line, she’s also working hard to get Stamos as her next victim on Dancing With the Stars. SheKnows’ celebrity correspondent, Whitney English, stopped by The Sports Club/LA to take a dance fitness class from Karina herself. Somewhere in between their sweaty dance moves, Whitney had the chance to soak up what else is new with the recently engaged Smirnoff. 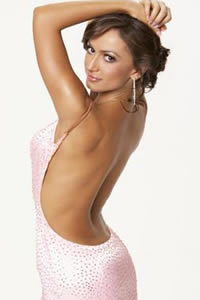 Karina may have a new diamond on her finger and fiance who’s responsible for it, but that’s not the only thing she feels blessed with. She told us that Ralph Macchio, his energy and his approach to the show was god’s gift to her last season. “And the producer’s gift,” she jokes. So, who does she think can fill his dancing shoes?

After ruling out George Clooney, Karina calls out to Stamos yet again. “I mean… someone like John Stamos would be a good addition to the cast,” she laughs. “I’ve been saying it for a few seasons now. So he’s either getting the message and ignoring it or he is not getting the message.”

Hello? John? Are you out there?

In between their dance chat, Whitney took part in Karina’s class and discovered, the hard way, why Stamos might not be up to a Dancing With the Stars season. It can get pretty sweaty!

Though she’ll be upset if John Stamos still refuses to step up to the challenge, Karina also thinks Corbin Bleu from High School Musical would be a good celebrity pairing for her. “In High School Musical they had to dance and sing so he has the rhythm and the natural ability.” She’s also hot for his class act and sweet personality. You may have to take the reins on this one Corbin; Stamos hasn’t responded.

Outside of campaigning for the perfect partner, she’s kicking back in her new Bearpaw boot, teaching classes at her new dance studio in Woodland Hills and getting ready to say ‘I do.’

Karina Smirnoff from Dancing With the Stars teaches SheKnows’ celebrity correspondent, Whitney English, some dance moves and chats about what’s new with her.