Matthew Lewis’ character Neville Longbottom has a moment in Harry Potter and the Deathly Hallows Part 2 that is every boy’s dream. “Every actor wants to be the James Bond,” he said.

Matthew Lewis and his onscreen alter ego Neville prove to be quite heroic in the final installment of the Harry Potter series, Harry Potter and the Deathly Hallows Part 2. 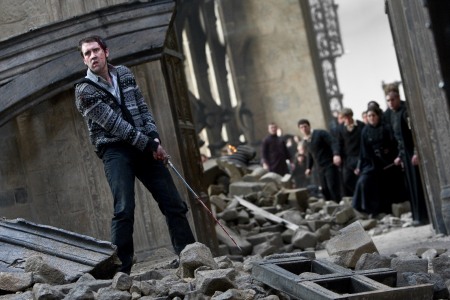 Lewis spoke to SheKnows about the entire epic finale and how working with such esteemed UK thespians was in a sense a master class in acting. Lewis also tells us how during his big moment on screen he almost killed someone because of his clumsiness!

SheKnows: When you read the book Deathly Hallows, what did you think when you saw that Neville had a huge epic moment in the end?

Matthew Lewis: I was in bed actually when I was reading that and I remember, J.K. Rowling had already told me a few years previously that she just finished and she had written an exciting bit for Neville Longbottom. I didn’t know what to expect to be honest, but I read the book and I remember sitting bolt upright in bed and thinking, “Wow, that’s going to be cool.” I knew Neville was special. I knew he had something to give in this last book. But, I didn’t expect it would be as epic as that.

SheKnows: What was the pressure like delivering that speech?

Matthew Lewis: Naturally, after the excitement calmed down, the immense amount of pressure started to build. I realized it was going to be crucial. I was a huge fan of the books and I know what these stories mean to a lot of people around the world. I wanted to make sure we got that right. I remember reading the script and Ralph Fiennes was in there, I remember being very nervous when it came to “the day” when we had to do that scene. I was terrified. Ralph is a very, very frightening man. Especially when he looks like that [points to giant poster of Voldemort]. I suddenly felt like I was in the hardest exam in my entire life. But you know what? It spurred me on, that boost. That kind of challenge is what you need as an actor. I will never forget it.

SheKnows: How did you take to the action during the battle scenes?

Matthew Lewis: There was lots of running around. I’m not very good with a sword [laughs]. I nearly killed somebody! When I do that big swing in the film, the sword came off of the hilt and went 30 feet in the air. I was just holding the hilt looking terrified. But it went up, and of course, everything that went up must come down, and it landed amongst a group of children — the last place I wanted it to go. Amazingly it missed everybody. If you see it in the museum, it’s dented and bent, that was because of me. I did that [laughs].

An end to a British institution

SheKnows: What was it like working on the set with such esteemed British actors? 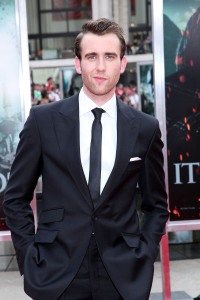 Matthew Lewis: It was funny how it changed. They’ve always been lovely, but in the early days, it was very much a separation of the children, and the adults. As we got older, we realized we could speak to them and they wouldn’t kill us [laughs]. I enjoyed talking to Alan Rickman about scrambled eggs and inane things. It was just talking to someone at work. It was a lot of fun. David Thewlis was great. He was one of the first adult actors that I had much to do with. It gave me confidence working with those guys. That professionalism was amazing, but they also could have fun. Alan Rickman has such a frightening character, he has that aura and a presence, yet he’s such a good person to be around, so much fun. Yet, they’re just people — as soon as you can realize that, you can just have fun with them. I learned a tremendous amount from them all.

SheKnows: In the film, there’s a romance between Luna and you, what did you make of that?

Matthew Lewis: I liked it. Obviously I think it’s terribly coincidental that Harry (Daniel Radcliffe) and Ron (Rupert Grint) marry people from high school — I know that doesn’t happen often. Neville and Luna are both outcasts when they’re younger. It was endearing for two inspiring characters. Both come from humble beginnings, people think that they’ll never amount to anything and yet they both do. But, Luna is a lot more scary than Voldemort, I think [laughs]. Girls in general are scarier than Voldemort. It might have been the next challenge for Neville.

Matthew Lewis sat down with us at the Harry Potter Experience exhibit in New York City to add a little more to his own Harry Potter experience.