Daniel Baldwin is shedding more light on the events that led up to his surprise divorce filing today: His wife threatened to kill him! 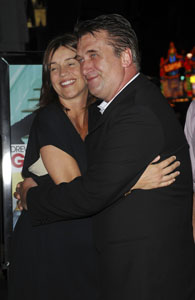 Daniel Baldwin says his wife Joanne Smith-Baldwin threatened to kill him in front of their two kids — so he had no choice but to leave her and take the kids with him.

In a declaration to the court, Baldwin says Joanne entered the bedroom after she watched a TV documentary about women who kill their husbands and said, “Now I know how to do it, I understand why they did it. You have been warned.”

Baldwin claims their daughter overheard what her mom said and asked him, “Is Mommy going to kill us?”

The actor also claims Joanne is often totally hammered around the kids and had physically and verbally abused him. It all came to a head on Sunday when, he says, she went into a “violent rage” after an argument with her mother, punching him in the head and face.

Baldwin called the cops and, after hearing what he had to say, they told him Joanne was unfit to care for the kids and that he needed to remove them from the home immediately.

Daniel Baldwin filed for divorce today after winning a temporary restraining order and temporary custody of the kids.