Related story Celebrities You Had No Idea Were Related to Royals 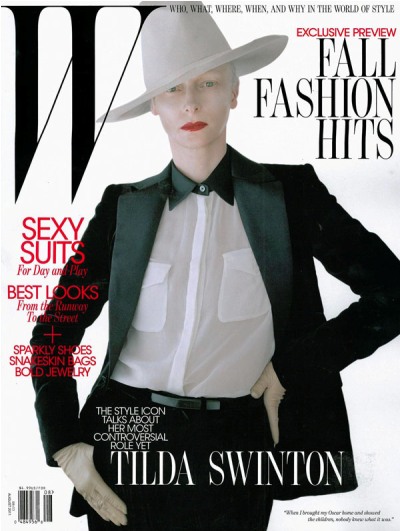 Rare is the actress as unique and daring as Tilda Swinton. The Oscar winner’s latest role in We Need to Talk About Kevin has pushed the 50-year-old, who is the mother of twin boys, to explore a new side of herself.

W magazine spoke to Tilda Swinton about We Need to Talk About Kevin in which she plays the mother of a very disturbed, violent boy. “The movie, which is based on a novel by Lionel Shriver, explored a taboo subject: the idea of a less than perfect mother,” Tilda explains. “I knew that, when an audience watched the film, there would be a gag reflex at some point. But I was fascinated by the subject — it scared me, and that interested me.”

Tilda Swinton continues, “When we were trying to finance this movie, we would reference Rosemary’s Baby. It’s every pregnant woman’s nightmare to give birth to the devil.”

Tilda admits her own experience becoming a mother to twins Xavier and Honor, now 13, wasn’t worry-free. “When I first saw the twins, I really liked them. And, at the same time, there was a ghost over my shoulder saying, ‘What if I hadn’t liked them?’ Kevin spoke to that feeling. It is that nightmare scenario: What if you don’t feel that connection to your children?”

She continues, “In Kevin, the woman I play is in mourning for her past life, and yet she looks at this dark, nihilistic kid and knows exactly where he comes from. He isn’t foreign to her; she sees herself. And that is, quite literally, revolting to her.”

Speaking of the Oscar Tilda Swinton won for her role in Michael Clayton, the actress says, “Yes, that was lovely, but I have to admit that I’d never seen the Oscars on television and really had no idea that it was so important. It was a very long show, but it did move me up from the children’s table, professionally, in Hollywood.”

Are you up for seeing Tilda Swinton in the role she describes as a mother’s worst nightmare?