Dave Grohl got a fan kicked out of a concert — ironically because he was fighting. 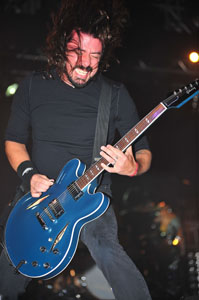 The only fighting going on around Dave Grohl should be of the foo variety, he decided. The Foo Fighters‘ lead singer kicked a fan out of a concert because he started a fight in the crowd.

Grohl saw the brawl from the stage at the iTunes Festival in London and stopped the music immediately.

Grohl then pointed out the audience member to security and had him escorted out of the venue.

Check out the video and see how it all went down for yourself — due to strong language, it’s probably not safe for work.