Gossip Girl actor Chace Crawford is the latest A-lister to sign on for the movie, What to Expect When You’re Expecting. 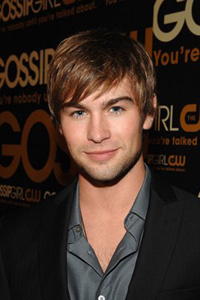 Chace Crawford is gearing up to be a dad… for a new role, that is. The Gossip Girl actor will star in the movie What to Expect When You’re Expecting, along with Cameron Diaz, Jennifer Lopez, Brooklyn Decker, Rebel Wilson (Bridesmaids), Elizabeth Banks, Anna Kendrick and Rob Huebel (Children’s Hospital).

If the title of the movie sounds familiar, it is because it is actually based on the best-selling pregnancy book of the same title by Heidi Murkoff.

Crawford will play the role of Marco, who reunites with an ex-girlfriend (Kendrick) after they have a turf war over their food trucks. The couple suddenly finds themselves dealing with a surprise pregnancy.

The movie will have a series of interlocking stories (similar to Love, Actually and Valentine’s Day) and it will be interesting to see how they spin a movie off of one of the most popular pregnancy guides of all time. The four couples in the movie will all be experiencing the ups and downs of having a baby.

Brooklyn Decker’s character plays a woman who is married to an older man and, to the annoyance of her peers, has an easy pregnancy, despite being pregnant with twins. Elizabeth Banks’ character is described as “baby crazy” and has strong thoughts on breastfeeding and parenting — until she gets pregnant. Jennifer Lopez will play a woman who adopts a baby abroad.

Directed by Kirk Jones (Waking Ned Devine, Nanny McPhee), What to Expect When You’re Expecting will begin shooting this summer and will hit theaters May 11, 2012.