Brooke Mueller is denying she is back on crack after photos surfaced of her carrying what looks like drug paraphernalia. 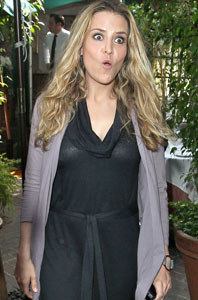 Is Brooke Mueller back on crack? Photos surfaced of Charlie Sheen’s ex-wife carrying what looks like a home-made crack pipe, but the mom of twins denies it was for crack.

Instead she says it’s merely for pot.

Friends of the addict told TMZ Brooke said she only uses the pipe to smoke marijuana, and despite the fact that she has been in and out of rehab multiple times, she says pot is okay — in fact, she claims she has a prescription for the drug to help her combat anxiety.

Medical marijuana is legal in California, where Mueller currently lives with her parents and Sheen’s twin boys.

Brooke claims when she falls off the wagon it is generally only for 12 hours at a time and her drug of choice is cocaine, not crack.

Mueller’s most recent trip to rehab was in May, just after her divorce from Charlie Sheen was finalized. She even skipped the premiere of The World According to Paris to focus on her sobriety.