The face of the 1992 Los Angeles riots was busted for DUI Tuesday — in the middle of the afternoon! 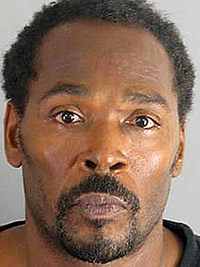 Paging Dr. Drew: One of your former Celebrity Rehab patients is in dire need of your help… again. Rodney King — famous for the savage beating he endured in 1991 at the hands of the LAPD — was arrested Tuesday in Moreno Valley, California, for suspicion of DUI.

King was pulled over around 3:30 p.m. Tuesday in his 1993 Mitsubishi after committing “multiple infractions,” according to Moreno Valley police officials.

This isn’t the first time King has been arrested for DUI — he was previously arrested in 2003 after he drove through an intersection and hit a tree at over 100 mph, according to TMZ.

King, 46, rose to infamy after the 1991 beating and subsequent acquittal of the four officers involved. The case sparked the Los Angeles riots that ultimately caused over $1 billion in damage to the city. He eventually spoke out about the beating when he said, “Can’t we just all get along?” at a press conference. The plea eventually turned into a catchphrase for the decade.

Listen up, everyone: It’s summer and time for fun, but never drink and drive. It’s just not worth it!