Renee Zellweger and John Stamos were spotted at Disneyland earlier this week. Are they dating?

Has Renee Zellweger traded Bradley Cooper for Uncle Jesse? Have mercy… it looks like it’s true! Zellweger, 42, was spotted at Disneyland with actor John Stamos, according to Us Weekly. 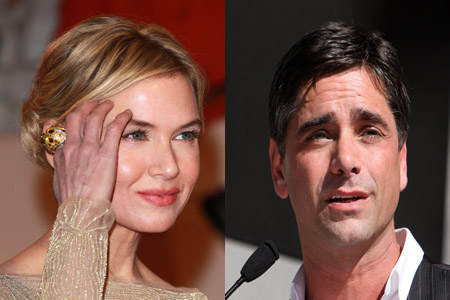 The pair “looked really close and both very happy,” according to eagle-eyed fans at the Disney park.

Stamos, 47, and Zellweger “were trying to stay under the radar.”

“We recognized him immediately and asked him for a picture,” a fan said of the white t-shirt and black baseball cap-clad Stamos. “[He and Renee] were both very nice! She was definitely more shy.”

In fact, the fans asked Zellweger to take a photo of them with the Glee star. “We actually didn’t recognize her until they were leaving, and she handed my phone back to us!” the fans said.

Reps for Zellweger and Stamos haven’t responded to requests for comment.

Were these two just enjoying a day in the park as friends — or is something more going on there? We’d really like to know.

“[They] were having a great time laughing and dancing as they walked from one ride to another,” the fan added.

Do you think John Stamos and Renee Zellweger are a cute couple?