Levi Johnston and sister Mercede have more in common than just genetics, they’re both posers — for Playboy! When not busy stripping down, Mercede Johnston has been keeping a blog, and little sister’s got plenty to say about Bristol Palin. 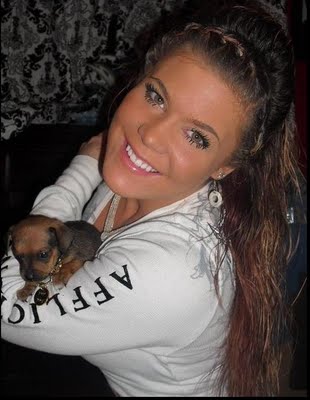 Mercede Johnston and Levi are one brother and sister pair that have each other’s back. Levi Johnston‘s little sister has been confirmed for the pages of Playboy, but it’s Mercede’s blog about Bristol Palin that’s crying for attention at the moment.

The September issue of Playboy magazine, run by the still alive and kickin’ Hugh Hefner, will feature the second member of the Johnston family to strip down. Mercede, younger sister of Levi, has posed for a four-page nude pictorial just two years after his backside graced the glossy pages.

Mercede Johnston is fiercely protective of her older brother Levi, and has taken to blogging to defend him during Bristol Palin’s Not Afraid of My Life: My Journey So Far book tour.

The 18-year-old addressed the infamous night Bristol Palin’s virginity was “stolen” by Levi Johnston in a post titled “Bristol misnamed her book. It should read Not Afraid of Lies.” Mercede asks, “Does anybody really believe a good Christian girl, such as Bristol claims to be, would really lose her virginity in a tent? I don’t think so. Usually girls want their first time to be meaningful and special.”

“Besides there happens to be a small detail which Bristol chose to leave out,” she continues. “You see there was another couple right next to Bristol and Levi in that very SAME tent. So the question we have to ask is, was the other girl also being ‘taken advantage of?'”

Mercede Johnston, who claims she is not allowed to see her nephew Tripp, also calls foul on Bristol Palin’s claim that the drinking on the camping trip was her first brush with alcohol. “It was Bristol herself who was asking around trying to buy alcohol before they even started packing to go on this particular camping trip,” Mercede writes.

“So I think it is clear that she was always planning to drink while they were camping. I know for a fact that my brother was not replacing her empty bottles with full ones, because Levi never liked her to drink since it just made her more promiscuous (Which those guys in Juneau will confirm, right Bristol?)”

We have to ask, when Mercede Johnston’s Playboy issue debuts, which will be hotter — the photos or the Bristol Palin lashing?