Ryan Reynolds is bouncing back from his divorce with Monster stunner Charlize Theron.

We all figured Green Lantern star Ryan Reynolds was too hot, adorable and funny to stay single for very long — and we were right! Reynolds, 34, is reportedly dating Oscar winner Charlize Theron — and it sounds pretty serious. Reynolds and Theron, 35, “have been dating — for months! They’re exclusive, and it’s very hush-hush,” a source told Us Weekly. 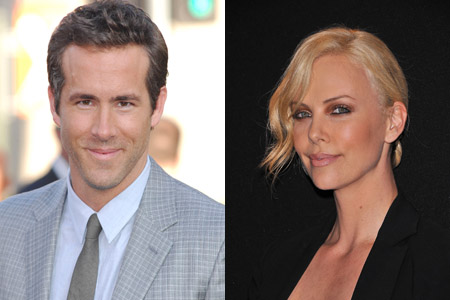 “They’re both career-focused,” the source added. “But not in a crazy way.”

Don’t expect them to flash their relationship all over the rep carpet, though.

“She won’t go to an event with him,” the insider said of Theron. “That’s not her style.”

Reps for both Theron and Reynolds haven’t responded to our requests for comment.

Theron split with actor Stuart Townsend in 2010, while Reynolds went through a public divorce with actress Scarlett Johansson earlier this year. They might be a good fit — Theron doesn’t want to get married.

“I’ll be the first to say here on your show,” she told Piers Morgan on Piers Morgan Tonight, “marriage… was never something that was important. I don’t know the exact reason for that. Some would say it’s because I came from a very troubled marriage. My parents did not have a good marriage.”

Reynolds isn’t too anxious to waltz down the aisle again, either.

“Anyone who gets divorced goes through a lot of pain,” he said after his divorce. “But you come out of it. I’m not out of it yet. At all. But I sense that as I do come through it, there’s optimism. I don’t think I want to get married again, but you always reevaluate these things.”

Do you think Charlize Theron and Ryan Reynolds make a good couple?