Daniel Baldwin has filed for divorce after four years of marriage. 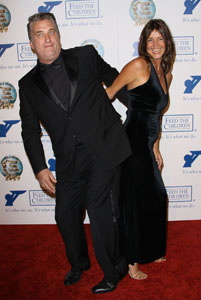 Actor Daniel Baldwin has filed for divorce from his wife of four years, Joanne Smith-Baldwin, and says her drinking and drug use have put their two kids in danger.

Baldwin received a temporary restraining order against his wife yesterday, and the judge gave him temporary custody.

“Due to recent events in our home and for the safety of my children and myself, I have made this decision,” Daniel said in a statement.

“I have had my share of problems with drugs and alcohol many years ago and know first hand how difficult a position she is in.”

He’s not kidding. Back in 2007 Baldwin told Primetime, “I’m a straight-up cocaine addict. I don’t really drink very much, although I have abused alcohol in the past. And I don’t use any other drugs. I don’t take pills. I don’t do anything. I’m a… diehard coke head.”

“I kid you not, from the first time that I had smoked a hit of cocaine, I was in rehab six months later,” he said. “It, it grabbed me so firmly and I was so out of control with it immediately.”

This will be Daniel Baldwin’s third divorce. In addition to his two kids with Joanne, he has three other children with three different women.